Start a Wiki
Mad Paintball is a team-based first-person shooter game developed by Mad Studio. It is heavily inspired by a popular game, Team Fortress 2. The game is currently mostly unplayable, due to a roblox update that caused the players to never spawn with a paintball gun.

Currently, there are 3 game modes:

There are currently 4 maps in this game. Some maps can only be played by the following modes.

Mad Paintball features numerous characters from The Mad Murderer, but also several all-new characters introduced in this game and one creature from two other titles, Darkness I and Darkness II. Each character has only one class. There are 47 characters currently in this game: 14 in the rifle class, 13 in the shotgun class, 11 in the sniper rifle class, and 9 in the minigun class. These are the four playable classes, which are as follows:

These characters enlisted below are available at start.

These characters were distributed during events, and do not appear in the shop unless already acquired. Or, they are in the process of being tested.

Paintball guns are purely cosmetical, universal alternate skins that can be used by any character in Mad Paintball. Most alternate paintball guns have a color restriction of what colors of paintballs they can shoot. Currently meshes of five gear items are used for the skins: Paintball Pro, Holiday Ray Gun, Hot Chocolate Launcher, Leprachaun's Gold Rainbow Laser Gun and Red Rebels Paintball gun. Red Rebels mesh, however, does not yet have any skins published to non-developer players.

Changing paintball gun skin doesn't apply until player dies and respawns or changes character. Attempting to change skin while the conditions of changing character (standing in forcefield-protected spawn room or during standby phase) are met will not force respawn nor change skin.

Brought to you by Mad Studio http://www.roblox.com/My/Groups.aspx?gid=858127

Billy with a Bloxy Cola

Dennis with Julie in the Background 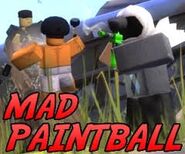 Another thumbnail featuring Tom
Add a photo to this gallery
Retrieved from "https://madstudios.fandom.com/wiki/Mad_Paintball?oldid=36826"
Community content is available under CC-BY-SA unless otherwise noted.